"Though she be but little, she is fierce."

At least, I think that’s the quote I meant when I wrote a barely legible scribble in my notes around mile 1140 on the second night of the 2021 Baja 1000. It was dark, and we were about 15 miles down a dirt spur road that crossed the racecourse. The mechanics had just fixed a shock on Wayne Matlock's UTV (Utility Terrain Vehicle), the third shock repair of the race, some 32 hours after the start the day before. Just looking at the math on that makes my head hurt and might go some way toward explaining why my notes are Shakespeare interspersed with food stains.

What I was trying to say was little and fierce is a mystery of my sleep-addled brain. Something was small. Something was ferocious. That's a description that could apply to Wayne's wife, Kristen, who was driving the entire race in her own Polaris RZR; she was, at the time, several hours behind Wayne, having had some mechanical difficulties of her own but, according to the trackers, absolutely hauling ass at an incredible pace.

Or maybe I was talking about the mosquito in the truck? I couldn’t really swat it, there just wasn't room to wave my arms around in the tightly packed cab. I think, though, that I was talking about Baja itself, a bold little strip of land that juts out south of San Diego, paralleling mainland Mexico and channeling an inlet of the Pacific Ocean into the Gulf of California. Baja is connected to two countries, reflecting cultural influences from both, and yet has a personality all its own. Little but fierce, indeed. 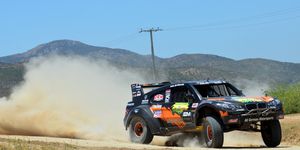 You Boys Like Mexico? In an X6 Baja Truck, Yes

Attempts to tame the Baja desert via motorized transport have been formally occurring since 1967, and yet even now, in 2021, with GPS screens, satellite radios, chase trucks, chase planes, and chase helicopters, the DNF list for the SCORE Baja 1000 is two pages long. Broken cars, crashed trucks, lost routes, and lost heart, Baja throws obstacles both physical and mental into the path of anyone brave and foolish enough to attempt a non-stop, high-speed journey across its wilds.

This is especially true in years, such as 2021, when the course runs the length of the peninsula. In other years, the 1000-mile course (that distance is give-or-take, it's been as low as 800 miles and as high as 1679) is run in a loop formation, starting and ending in Ensenada. A loop is obviously easier from a logistical standpoint, but there's a romance to the one-way runs, despite, or maybe because of, the additional challenge. To make it through requires carefully timed pit stops, team-wide communication, and a lot of caffeine. The Matlocks had two dedicated trucks per racer and a sweep truck as backup. All were fully loaded with both parts and people. Once on the move, none of us would stop for longer than a tire change or a repair. It was less chasing than leapfrogging, a constant push-pull, jump ahead, and fall behind, getting a support truck where it needs to be for each pit stop along the course. Endurance Vehicular Hopscotch.

To truly understand the Baja 1000 chase experience, you should read the rest of this over the course of the next 40 hours, from the middle seat of a Ford F-250 between two very nice but not recently showered race mechanics. At some point, you can take a nap under a rock. Check for scorpions first. Or don’t, you're very tired.

My notes start neatly at the top of the Baja Peninsula, where I'd been invited to ride in one of the chase trucks with the husband-and-wife team of Matlock Racing. The Matlocks are Polaris factory-sponsored racers, with multiple UTV wins and championships under their belts, and the first few pages I have are details about their race vehicles—an RZR XP 1000 for her and the just-released RZR Pro R for him. The new Pro R is a big deal in side-by-side circles. At the tech inspection the day before the race, Wayne's blue-and-white machine was swarmed by crowds, many of them competitors in other UTV classes, all wanting a closer look at the 2.0-liter four-cylinder engine and beefy suspension. Even to those unfamiliar with recreational off-roaders, the Pro R stood out, an intimidating tall spider of a rig among the smaller, more buggy-like Can-Ams and older Polaris models. The RZR Pro R was announced only days before the Baja race, and there was a large contingent of Polaris engineers along with the Matlock's usual chase crew to support the new vehicle—and take note of any shortcomings. Baja is good at finding any shortcomings. In fact, that’s how the 1000 started, as a way for manufacturers to prove what their bikes, cars, and trucks could do.

These days, there isn't much that’s factory in the top-class Trophy trucks, but in the UTV classes, there’s tight competition and intense manufacturer support. "With the Trophy truck, we used to have manufacturers like Ford, Chevy, Dodge, Toyota, but UTV still has the manufacturers involved," said Rob MacCachren, who was celebrating his and Luke McMillin’s overall and Trophy-truck class win before the rest of us were much more than halfway through the course. "To win in Trophy truck, you almost have to have a million-dollar all-wheel-drive truck, a helicopter, and an airplane all night. With UTVs, obviously that helps, but there are so many other things. Strategy." Then he quizzed me about the new Pro R. "I tried to see it before the race, I stopped by the shop where they were prepping it, but they wouldn’t let me check it out. It's incredible, honestly. My prerunner buggy would cost someone about 125 grand—those Pro Rs are faster and capable of more than my car is." The Pro R, if you’re planning to challenge Rob Mac to a race, starts at $32,000.

Oh, but I've skipped ahead, because the notes with MacCachren are from the end, and in the middle is all the drama. I was in the second chase truck, which meant our first pit stop was some 70 miles into the race. It was a "visual," just eyes on the car as it went by and a report back to the other truck that the wheels were still attached and things were on schedule. Just in case they weren't though, we had to be ready for a proper pit stop, which meant having a jack and axle kit at the ready and the fuel crew suited up and in position. Fueling the cars is dangerous, a drip on hot exhaust goes up in an instant. We saw it happen one pit over—luckily they put it out before anything or anyone was damaged. Our own drama was less heated: The fancy jack extension didn’t match the fancy jack. "A problem when packing multiple trucks," said driver John Bahl. Polaris engineer Matt Kmecik and crewman Marco Perez carefully machined it down on the back tailgate. And by carefully machined, I mean, sanded it off with an angle grinder until it fit. Our celebration was cut short by a crackle on the radio as Wayne came into range. "All good," he said, and a few seconds later he passed us and disappeared in a cloud of dust. Our work would come in handy later, though—we ended up making good use of the jack.

For most of the race, our view of the cars was as clouds of dust. The exciting jumps and breathtaking scenery happen out in the dirt, so chasing the race from the parallel highway is a bit like chasing the Road Runner: no form, just the lingering proof in the distance that something went by fast. During the night portions, the race cars look like fireflies, bobbing lights out in the darkness. It’s very peaceful from afar, a trick the desert likes to play, butterflies hovering over bones. For the racers, there are sections of whoops that pound suspension components and human components alike. The dust chokes the air during the day, and at night as the coastal fog settles among the cacti, the dirt turns to mud. At one stop the fog was so thick we could barely see the cars coming. When Wayne pulled in, he and the navigator made frantic gestures until I figured out they wanted a dry rag to wipe down their visors, which were opaque with wet dust.

As is the case with any endurance task, as the hours and miles clicked by, we developed a sort of rhythm to our chase. Sun goes down, sun comes up, stop, set up, wait, fill up, pack up, back on the road. Memory gets hazy and turns from a timeline to snapshots. A sunset so dramatic it filled every window of the truck, 360 degrees of sky on fire. A Trophy truck pitted next to us, the crew frantically trying to fix something down in the floorboards, a crewman head down through the window, just feet flailing above the roofline. The mountain pass into Loreto, a view of the ocean all turquoise and calm. Fixing a shock. Fixing a shock again. And then, the end. Somehow the 1227 miles became 100, and then 10, and then we were there, 33 hours after we started, midnight hugs on the finish-line ramp and lukewarm Tecates while waiting for Kristen. She made it too, just shy of 37 hours in the car. Baja, fierce Baja, was tamed, until the next time.

This content is created and maintained by a third party, and imported onto this page to help users provide their email addresses. You may be able to find more information about this and similar content at piano.io
More From Features
2021: The Year in Car and Driver Magazine Covers
Why Everything Old Is New Again
Advertisement - Continue Reading Below
2021 in Review: Spare a Chip?
Seven Super Books for Gearheads
Window Shop with C/D: Cars We'd Want to Inherit
Best New Luxury SUVs in 2022 Ranked
Tackling the Desert in Volkswagens Old and New
The Wildest, Craziest Car Paint Colors for 2022
Best Lease Deals for December 2021, $299/Mo & Up
Dyer: Chip Shortage Is Totally out of Control